The history of engagement rings

Posted by bhur4t on May 10, 2014 in Diamond rings, Engagement rings | Short Link

The history of engagement rings

The engagement ring has become an integral part of the whole wedding process for people in different traditions and cultures all around the world. Some people even believe that the absence of this special ring would lead to a less than happy marriage. However, there is one question that rises all the time about engagement rings. Why is a ring so strongly related to a marriage proposal? This brief history of engagement rings might help. 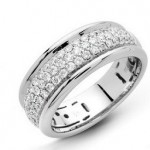 The first recorded appearance of an engagement ring comes from the proposal of Archduke Maximilian, the ruler of Austria. He proposed to Mary, a beautiful lady from Burgundy asking her to become his wife. The ring itself has a thin and flat design with small diamond pieces on the top of the ring, forming the M to represent the bride’s name.

The proposal of the Archduke of Austria may become the first written record we have of the engagement ring, but history tells us that in fact, the history of engagement ring far precedes the Archduke’s proposal. Historians and archaeologists believe that a token or piece of jewellery was used all the way back to ancient history.

In pre-history, cavemen tied a piece of cord just like a ring to someone they loved to put them under their control. We have seen cartoons of a caveman dragging a woman along by a piece of rope. This is not quite the case but certainly a cord was used to signify the bond.

From around 2800 BC until first century BC the Ancient Egyptians buried their beloved with a gold ring placed on the ring finger of the left hand. They believed this made connection between their heart and vena amoris. It was believed that a vein ran from the heart to the ring finger.

It was in the year 1477 our Archduke of Austria made his extravagant gesture with the diamond ring and his proposal to Mary of Burgundy. The idea caught on and began to spread both in geography and activities. In 1700, the tradition evolved in Europe and surrounding areas where people engraved their engagement rings with poetry. In 1800, Victorians in the UK made to the betrothal to another level by using human hair and gemstones to make jewellery and engravings.

In 1886, the engagement ring developed again as Tiffany & Co. came up with its 6-prong ring and its famous Tiffany setting. This was an expensive ring that only the wealthy could afford but only four years later, the era of an affordable engagement ring arrived. This came in the form in some jewellery stores, such as Sears and Roebuck.

In the 1930s the concept of the diamond engagement ring really took off. DeBeers, the diamond company from South Africa, ran an advertising campaign encouraging men to buy a diamond ring to give to their beloved when they proposed marriage. This idea grew in popularity and flourished into the tradition we know today.

One of the reasons diamonds have become popular as part of the token is because of the shine that radiates from the cut surfaces. This glittering light is supposed to represent the light and purity of love between the two people. This was of course an idea that DeBeers were happy to foster as it helped their sales of diamonds. 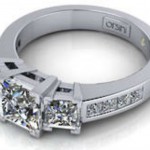 The notion of giving an engagement ring has been recorded in many cultures throughout the ages and each of them has much the same basis with three major elements: ring material, stones, and ring designs. So while the main factors are constant, the traditions using those three ideas vary from one area to another. And as we have progressed, the ring is no longer something you put at someone’s ring finger because you want to control him/her. Instead, it is a demonstration of your love, commitment and loyalty.

For happy couples in Auckland, NZ, there are plenty of jewellery stores you can choose from covering all price ranges from high street jewellery chains to exclusive jewellers like Orsini in Parnell. They offer a range of Italian designer rings as well as their own collection of diamond rings. Take a look here at some of the gorgeous pieces they have to offer. If the link doesn’t work, this is the domain name www.orsini.co.nz/. So go ahead and take a look.